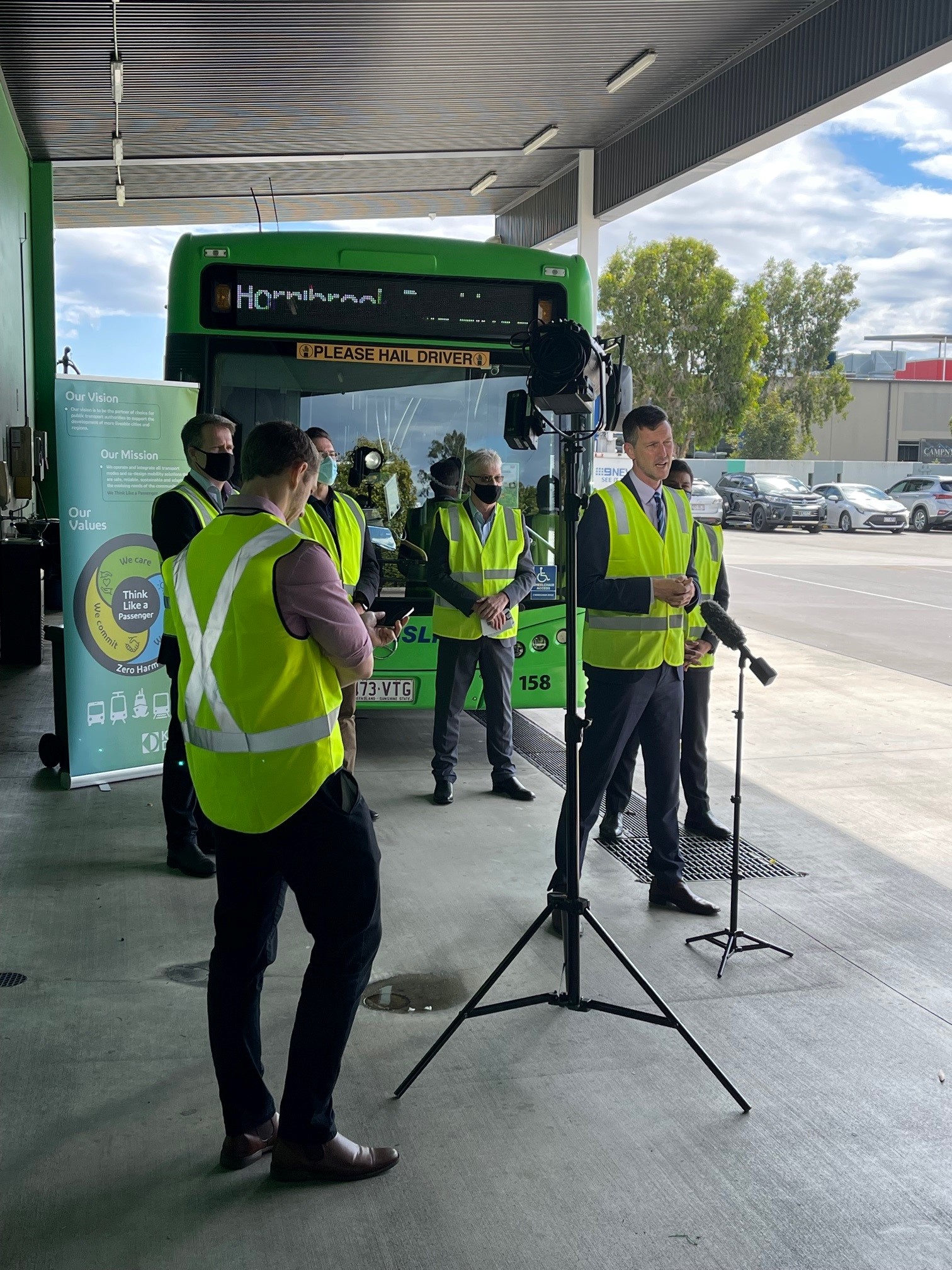 The Palaszczuk Government’s commitment to rollout more zero emissions vehicles on to Queensland roads has been supercharged with a plan to build 16 new electric buses on the Gold Coast.

The $15.6 million deal with Keolis Downer will also create the state’s first 100 per cent electric bus depot in North Lakes at the home of Hornibrook Bus Lines.

“This deal will see the largest rollout of electric buses in Queensland to date,” Mr Bailey said.

“These buses will be built right here in Queensland, at BusTech on the Gold Coast.

“The Palaszczuk Government has made a commitment that by 2025 every new urban bus we add to the fleet in SEQ will be zero-emissions, by 2030 we’ll roll that out to the rest of the urban fleet – and of course we want them to be built here in Queensland.

“This agreement gives us a good head start because the first bus is due to arrive at Hornibrook’s North Lakes depot by the end of next year.”

Deputy Premier and Member for Murrumba Steven Miles said the agreement was a win for local commuters.

“Hornibrook Bus Lines runs bus services through our northern suburbs like North Lakes, Chermside, Mango Hill, Kallangur and Sandgate, so I can’t wait to see these quieter and cleaner vehicles on our roads,” Mr Miles said.

“This isn’t just a good deal for commuters and our environment, it’s a boost to our state’s manufacturing sector too.

“The investment to make the North Lakes depot fully electric and build these buses on the Gold Coast is expected to support 150 jobs over the next two years.

“It’s also expected to bring more than $17 million of estimated value into the economy for local suppliers, contractors, which is the kind of investment we need right now.”

Assistant Minister for Hydrogen Development and the 50% Renewable Energy by 2030 Target Lance McCallum said the electric bus rollout was a key part of the Palaszczuk Government’s renewable energy commitments.

“By 2030, 50 per cent of our state’s energy will be from renewable sources and this deal with Keolis Downer will play its role in helping Queensland meet that target,” Mr McCallum said.

“While this depot and locally built buses will be electric, we are also keen to encourage the use of renewable hydrogen in transport.

“Our investment in renewable hydrogen production as a cleaner, cheaper fuel gives us potential to create jobs, reduce transport emissions and export Queensland’s renewables to the world.

“We want to continue to position Queensland to take advantage of emerging technologies and mobility options.”

“Reducing emissions in our transport sector is a major challenge, and we can only be successful through partnerships between government and industry like this one,” Mr Whiting said.

“Once completed, Hornibrook’s North Lakes depot will no longer house diesel buses and will be home to the 16 new electric buses exclusively.

“A full electric depot means reduced noise and no diesel emissions for our community.

“That will save 13,846 tons of carbon emissions over the life of the buses.”

“When passengers jump on these buses for the first time next year, they’ll be helping to improve the environment, while getting a cleaner, smoother ride.

“This rollout will also create more jobs for the area, and support local suppliers and contractors, driving our economic recovery from COVID-19.”

Keolis Downer CEO David Franks said it was a significant moment for the business in Queensland.

“We are proud to be partnering with the Queensland Government to transition our North Lakes depot to 100 per cent battery electric buses,” Mr Franks said.

“This means the depot will be using 100 per cent renewable energy, to power a fleet of electric buses, making it a first in Australia, and cementing Keolis Downer’s commitment to accelerate the energy transition with large-scale deployments in public transport.

“With this project, we are also encouraging local manufacturing through our partnership with BusTech Group, Australia’s leading bus manufacturer, based in Burleigh Heads.

“BusTech Queensland will manufacture the 16 Australian-designed and engineered electric buses in their facility in the Gold Coast, bringing more than $17 million of estimated value into the economy for local suppliers, contractors and local job creation.”

BusTech Group Executive Chairman Christian Reynolds said the company was excited to be involved in the project.

“Manufactured in Queensland, BusTech’s all-electric ZDi is built with the highest local content of any electric bus available on the Australian market.

The new buses, which will use 100 per cent renewable energy and be zero emission, will be built on the Gold Coast by Queensland bus manufacturer BusTech.

The first bus is due to arrive at the North Lakes depot in September 2022, ahead of all 16 being ready for service by late 2023.