Light rail is undergoing regeneration. It is the fastest-growing form of public transport, with over 400 networks in operation. At the heart of this renaissance is the ability of light rail to move large numbers of passengers and to enable the renewal of urban landscapes.

Importance of Light Rail to Clients and Customers

Light rail is more affordable than traditional railway and can be built more quickly. New light rail networks tend to not only enhance the areas they travel through but also deliver significant urban renewal benefits, including increased land values and greater convenience to customers.

The Gold Coast is a great example. The convenience to Gold Coast residents and visitors has been enhanced by light rail; and $6 billion of investment is planned, due directly to the presence of the network and its uptake by customers.

Not only does light rail bring value to local communities, but it is a key promotional feature for international tourists, and is therefore vital to the prosperity of our cities. Some older networks, such as the one in Melbourne, have been around for than a century and have become an intrinsic part of the city.

Keolis operates 17 networks around the world, including one of the world’s newest –on the Gold Coast – and the biggest and oldest – in Melbourne. Keolis light rail networks account for more than 670 million passenger trips per year.

Light rail is either being built, planned, or is under consideration in a number of other Australian cities, including Sydney, Canberra, Parramatta, Newcastle, Perth, the Sunshine Coast, Brisbane and Darwin. A light rail network is also being considered for Auckland, New Zealand. Keolis Downer will operate the new light rail in Newcastle that will launch in 2019.

Light rail is undergoing regeneration. It is the fastest-growing form of public transport, with over 400 networks in operation. At the heart of this renaissance is the ability of light rail to move large numbers of passengers and to enable the renewal of urban landscapes.

Keolis is one of the world’s largest and most successful bus and coach operators. It provides services in eight countries with a fleet of more than 23,500 vehicles. The Group’s bus fleet in Sweden runs entirely on alternative fuels and is 100% fossil free.

Rail is in the DNA of Keolis and Downer. Keolis is a subsidiary of the world-leading French national rail operator SNCF. Downer is one of the pioneers of rail in Australia. Our pedigree as a rail operator reaches back more than 150 years, and our operations span three continents.

Metro has been shown in research to provide the highest capacity transport solution for greater population densities. And from the perspective of customers, the speed, efficiency and amenity of a modern metro system ensures highly reliable and efficient service.

Keolis Downer offers communities multimodal transport solutions that are simple, efficient and seamless. By designing transport networks that people want to use, we break down barriers to passengers and therefore increase patronage.

As an expert in project delivery, Keolis Downer has the necessary skills, knowledge and processes to ensure a smooth transition from design to delivery, and in nurturing concepts and ambitions to realisation.

Keolis is the worldwide leader in light rail

Keolis Downer is currently the leading light rail operator in Australia. Governments planning to introduce or expand light rail networks can be confident that Keolis Downer has the necessary experience and expertise to deliver successful networks.

Keolis Downer has also proven its ability to deliver light rail in the context of broader transport networks. We can provide transport solutions as a sole operator of all modes or just of one. Further, we have experience in working with a variety of contractual agreements such as a PPP (Gold Coast, QLD), a franchise (Melbourne, VIC), or an integrated network (Newcastle, NSW).

Keolis is trusted by public transport authorities around the world and has delivered 20 new or extended light rail projects in the past 15 years.

Given this extensive experience, Keolis has unparalleled knowledge about how a city and its citizens adjust to the presence of light rail. This includes managing safety campaigns to educate motorists, pedestrians and passengers about how they should board and travel on trams.

Keolis can also offer insight into how a multimodal network should be adapted to maximise the value of light rail networks and minimise the duplication of services. On the Gold Coast, Keolis Downer worked with the client Translink and local bus operators to enable extended operating hours for the bus network and greater frequency of its services. 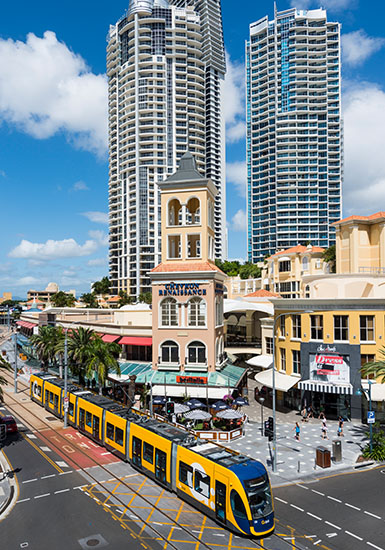